The impacts of climate change on homeless populations after the pandemic

The notion that health crises unfairly and disproportionately affect vulnerable populations was observed and documented during the greatest health crisis of this century. Furthermore, studies have shown that the distribution of COVID-19 is unequal among different ethnic and socioeconomic groups (Horta, 2020 and Wang, 2020) iii. They also highlight the importance of prejudice and systemic racism as elements that, when intertwined with biological characteristics, behaviors, and environmental factors, lead people to a situation of inequitable social vulnerability (Gray, 2020) iii.
.
The recognition of vulnerable populations as a priority during the health crisis gave rise to emergency health and social care initiatives to mitigate the situation. Unfortunately, the homeless populations were among the groups that suffered the most from COVID-19 and will continue to suffer from the new health crises associated with other events such as the climate crisis.

A recent comment published in The Lancet (Kidd, 2021) iv by the "Working Group on homeless and climate" [led by Prof. Sean Kidd of the University of Toronto] and a systematic review by the same group (Kidd, 2020)v described the differences in the impact of climate change in health and human well-being in populations and regions with significant economic and social disparities. These papers highlighted knowledge gaps on climate impacts and human health and the role of housing in populations' physical and mental health when exposed to climate change.

Another systematic review article (Bezgrebelna, 2021) vi identified increased risks of homelessness for vulnerably housed populations of lower socioeconomic status due to energy insecurity (e.g., inability to pay electricity bills leading to evictions) and due to natural risks induced by climate change. Examples include compromised housing due to flooding and extreme weather and farmland becoming unsustainable due to heat extremes. These populations become climate migrants, fleeing affected regions for urban centers where they face poverty and further compromised housing situations. This set of issues is compounded by violence and conflict that arises from these stressors and climate risk mitigation strategies that do not adequately attend to homeless populations. Green infrastructure in urban settings has been shown to have some benefits for homeless populations. However, local governments must ensure that homeless populations are not displaced from the new green spaces. To address these problems during the climate crisis, there is a need for better data on these issues, and structural changes based on human rights must be implemented. With data-informed systemic responses there is an opportunity to reduce the impact of climate change on homelessness and precarious housing.

In Brazil, the National Policy for the Homeless Population (PNPR) "consider as a homeless population the heterogeneous population group that has in common extreme poverty, interrupted or weakened family ties and the lack of regular conventional housing, and which uses public places and degraded areas as a space for housing and sustenance, temporarily or permanently, as well as reception units for temporary overnight or as temporary housing". (Brazil, 2009) vii

A study by IPEA (Natalino, 2020) viii concludes that in March 2020, there were about 221,000 homeless people, representing an increase of 140% of the homeless population compared to 2012 levels. The same study reports that growth is "observed in all Large Regions and municipalities of all sizes, suggesting that it is the same effect as national dynamics. In turn, the more intense growth in large cities indicates that the economic crisis and, in particular, the increase in unemployment and poverty are important factors for explaining what happened." 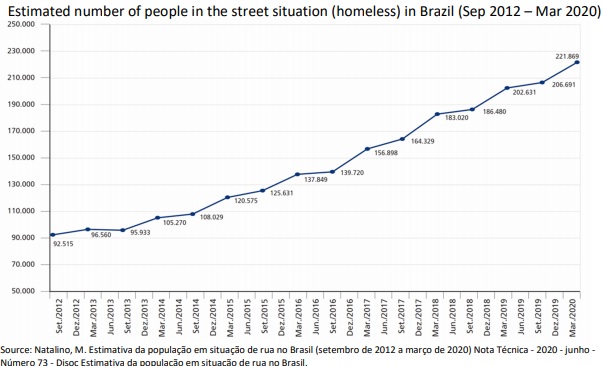 Another IPEA study (Silva, 2020) ix reports that municipal and national's survey shows that homeless population is primarily men (82%), from Black racialized groups (67%), young people with low schooling, being on the street or in hostels for a long time and who attribute being on the street to problems with alcohol and/or drugs, unemployment, and family disagreements. Most of them work and present some health problems. And this research shows that the street situation does not necessarily come from migration and that this group is productive, even if working in precarious activities. This situation leads to the loss of citizenship and the rights of the individuals who begins to receive the attention of the State and Society only for their survival needs (Escorel, 1999) x.

During the pandemic crisis, the homeless population was one of the authorities' focus of attention, even though they faced difficulties accessing the government's emergency actions. Therefore, there is an expectation (see the statement of the coordinator of the MNPR below) that this attention is maintained after the pandemic. If provisional measures such as shelter, medical care through the "street clinics program," and hygiene are kept as regular activities, it would be an asset for this population. It also is a logical thing to do since it is likely that the homeless population will increase due to the economic slowdown and will face other crises such as the climate crisis. In the words from José Vanilson Torres da Silva, national coordinator of the National Street Population Movement (MNPR) (Silva, 2020) xi.
:
"Being on the streets is difficult and now with the pandemic has become much more complicated, because housing, health, and education, among others, is the right of the Brazilian people and it is the duty of the State. They offer us shelters in isolation mode, but when this Pandemic passes, we're going to have to go back to the streets? For torment?"

A society's effort to understand the drama of vulnerable populations and generate inclusive actions can signify that a particular community is seeking a new, fairer, and more inclusive path that can transform the social and environmental determinants of everyone's healthxii. In Australia, for example, the use of social inclusion to improve personal development, mental health (VicHealth, 2005) xiii, and inclusion of disabled people have also resulted in socio-economic development, such as the creation of jobs (NDS, 2020)xiv.

Due to the relevance of this theme in preparing and responding to other health crises such as the eminent climate crisis and the knowledge gap, the scientific community of public health should devote collaborative efforts to understand better the dynamics and distribution of the effects of health crises on homeless populations. This knowledge will be relevant to establish effective structural or conjuncture measures necessary to provide a new perspective to these population groups that end up in this position not due to personal choices but because of complex social processes.

This article was originally published in Strategic Studies Center (CEE/Fiocruz)